Find this article at:
go.ncsu.edu/readext?619963
— Written By Marissa Herchler 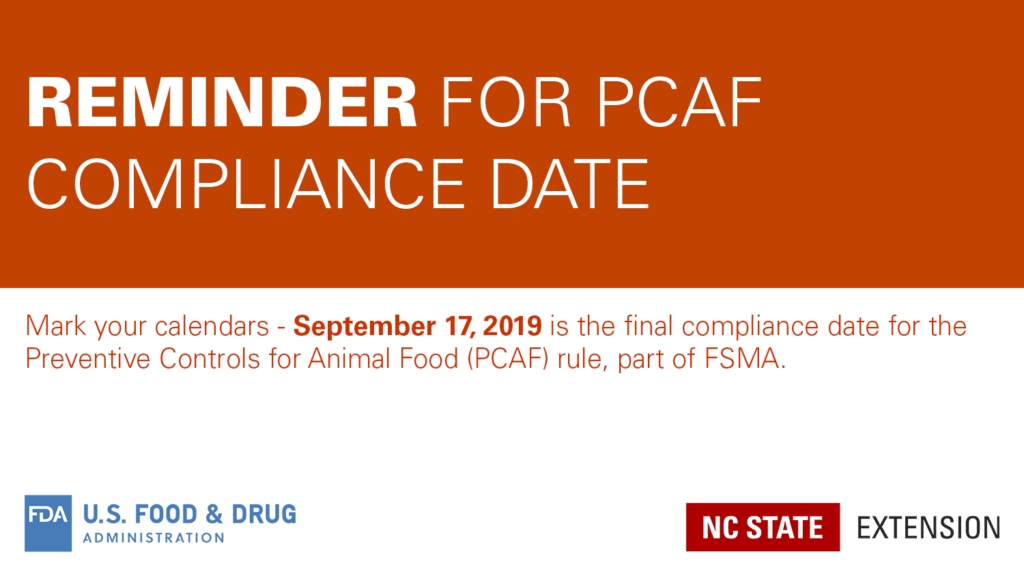 The final compliance date for the Preventive Controls for Animal Food (PCAF) rule, part of the Food Safety Modernization Act of 2011 (FSMA), is

The FSMA was signed into law in January 2011 by President Barack Obama to reform the food safety system in America to encourage facilities to be proactive, rather than reactive to food safety issues. The final rule was published in September 2015 and in July 2016, the Food Safety Preventive Controls Alliance (FSPCA) began providing training on the PCAF rule.

The compliance dates for FSMA have been staggered over the course of the past three years, providing one year between compliance with Current Good Manufacturing Practice (CGMP) and Hazard Analysis and Risk-based Preventive Controls. Compliance dates depend on the size of the business, determined by the number of employees or sales.

All facilities required to comply with Subpart C should have a written and signed food safety plan in place by September 17. Facilities should also be prepared for CGMP and Hazard Analysis inspections.

According to the FDA, FSMA inspections will be starting in October 2019. These inspections could last several days and may be completed by multiple investigators. It is likely that facilities will be inspected for compliance with multiple regulations in addition to FSMA, such as Medicated Feed CGMP, Veterinary Feed Directive (VFD) and Bovine Spongiform Encephalopathy (BSE).

See the requirements of the food safety plan.

Contact Marissa Herchler with any questions regarding the Preventive Controls for Animal Food rule.